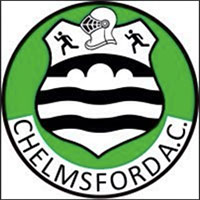 The newly formed Chelmsford AC took on their first opponents – Essex Beagles, at Dagenham Old Park in May 1935 – and returned home victorious.