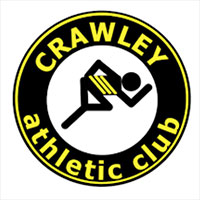 In August 1937, Crawley Harriers were formed, although there is evidence of a club of the same name in 1908.

In 1957, Crawley AC was formed as no club existed in the area since the start of World War II. It joined the BAL in 1985.

Whilst marathon running, Crawley’s AC Barry Worrall would place a lettuce leaf under his cap.