At Kingston, TVH won the clash with fellow round-one winners Blackheath & Bromley, who were third, also beating Harrow. Meanwhile, at Eton, WSEH took a home win, improving from just sixth in the first round. If the standings are confirmed, TVH now have 16 points with Harrow and B&B both on 14.

Some great throws results highlighted the performances at Kingston, where heavy rain stopped just in time for the start of the meeting.

The result of the shot put was never in doubt as GB international Amelia Strickler showed good loyalty to her club TVH. She will not have been happy with her winning throw of 17.22m but it put her more than four metres ahead of the rest of the field.

Newham’s Katie Head won the big clash in the hammer circle with fellow 69m thrower Jessica Mayho of Birchfield. Head threw 67.33m to the 63.68m of Mayho to reverse their order from the previous day’s competition in Manchester.

Bristol & West’s Oliver Biddle took more than half a second off his best when winning a close 400m with 46.56. Sam Reardon of Blackheath & Bromley also set a PB in second, his 46.69 just 0.19 outside the World Juniors standard. Reardon, who represented Britain in the relay at the World Indoors this year, also won the 800m with 1:55.42.

Jess Tappin (pictured below), who recently went under 56 seconds for the first time, continued her good form as she won the 400m hurdles with 57.24 for TVH.

In the men’s 4x100m, Harrow and TVH were together on the final change but the former were disqualified afterwards as TVH clocked a winning 41.18.

In the triple jump, UK No.2 Jude Bright-Davies, who went over 16m for the first time recently, found 15.38m enough for maximum points for TVH.

Sophie Mace added more than a metre to her best with 49.05m in winning the discus for TVH. Another win for the club came in the men’s pole vault, courtesy of Portuguese athlete Rubem Miranda’s 5.25m. 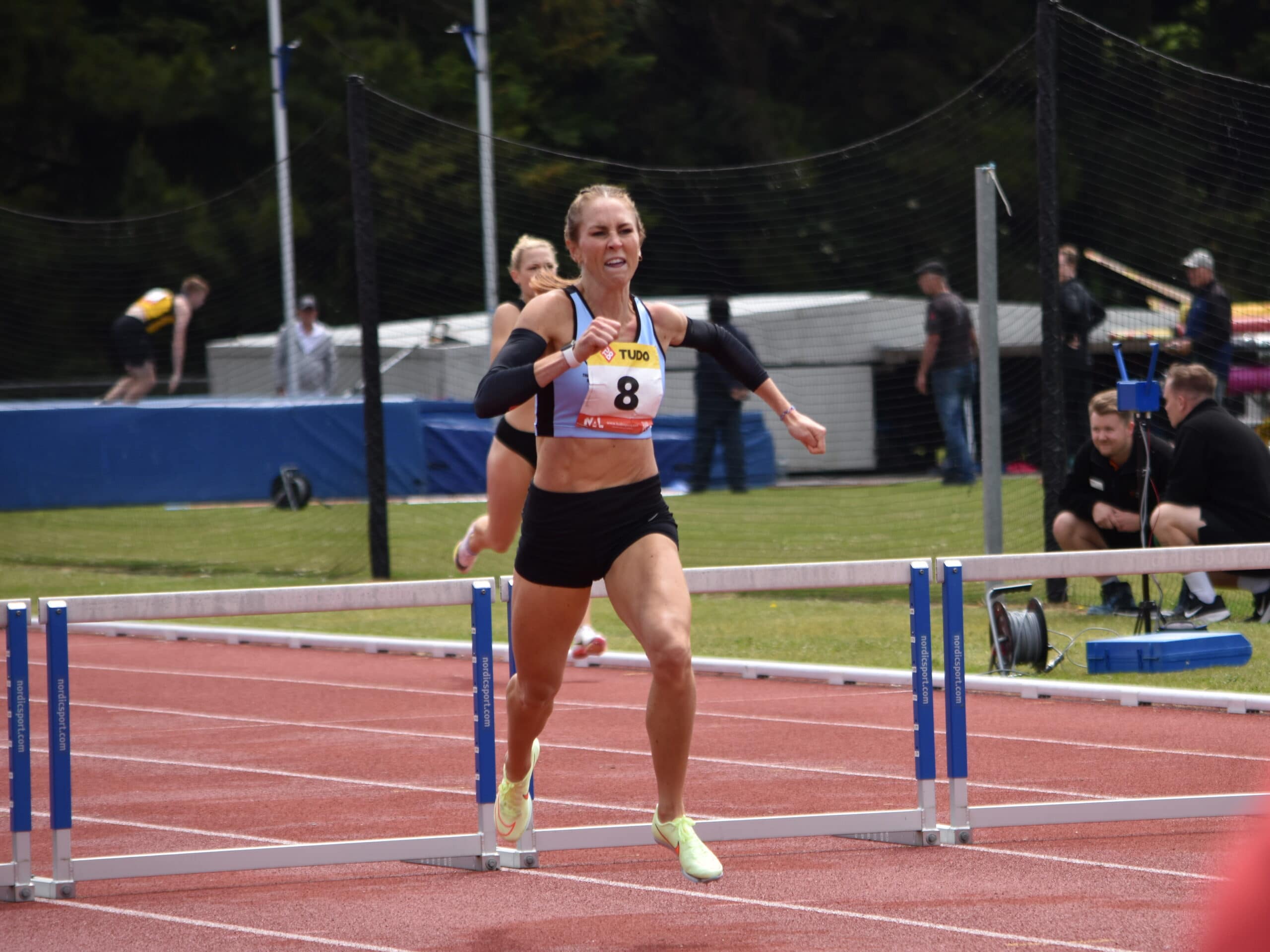 At Eton, the match track action began with the one-lap hurdlers, who provided two of the highlights of the meeting.

Shaftesbury’s Hayley McLean won the women’s event with 57.58, easily ahead of Caryl Granville (60.22). Windsor’s Jacob Paul was an easy winner of the men’s event in 50.34.

Shot-putter Youcef Zatat continued his fine form, winning with 18.67m to add 6cm to his PB. In second, Chukwuemeka Osammor also set a PB of 16.46m. Third was Patrick Swan of Swansea, who won at the Cardiff round.

In the discus, Windsor’s Amy Holder was 3cm outside her PB with 56.39m, 11cm short of the Commonwealth qualifier.

In the championship match at Bedford, Crawley (unofficially) added to their win from the first round.

Among their winners was Matthew Overall, who duplicated his 400m winning time from the opener with 47.85.

Bedford & County’s Gracie Wall returned to the scene of her PB from two days at the BIGish meeting, where she topped the UK under-17 rankings with 1.73m. Here she took 1.69m for the win.

The match score in Manchester is still not clear due to late results.

Shaunna Thompson took another set of top points for the club when throwing 14.45m in the shot.

Tonbridge decathlete Lewis Church equalled his PB in the 110m hurdles when running 14.70 as he and Chelmsford’s Bradley Reed could not split for the win.

In the National 1 match, City of Portsmouth unofficially appear to have taken a home win with four events still to be updated.

Pictures from Kingston (free for media use, email paul.halford@righttrackcontent.com for specific requests)